Beginning of thin film resesarch in the then Department of electron microscopy. In 1962 the first sputtered thin films were prepared by Prof. Boris Navinšek in a home-made apparatus. It utilised the principle of diode sputtering. 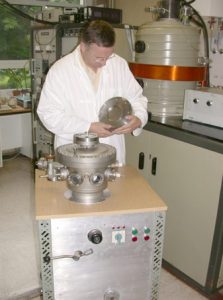 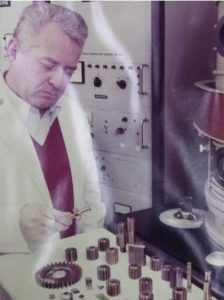 Purchase of the first professional apparatus for deposition of thin films Balzers Sputron. The first important achievement with this device was the deposition of standards for depth profiling techniques, which were made for National Bureau of Standards (NBS) and the company Perkin-Elmer. 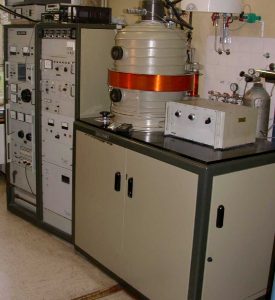 Design and construction of a low-energy ion accelerator (30 keV). Using this equipment various materials were ion-bombarded for the purpose of studying topographic changes and radiation damage in dependance of beam parameters. Sputtering coefficients were measured too. 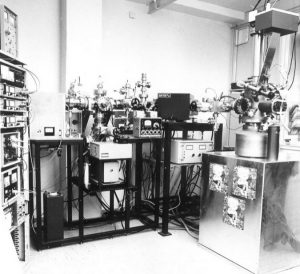 Beginning of hard coating research. In the Sputron experimental chamber the first TiN coatings were deposited, both on test samples as well as on cemented carbide cutting inserts. Another home-made deposition system was constructed which enabled the deposition of coatings on tools with a complicated geometry (drills, mills, taps). Thus in 1982 the Slovenian industry was already offered home-made “golden” tools. 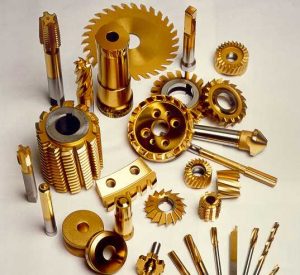 Establishement of the Hard Coating Center in Domžale and the purchase of a proffesional apparatus for deposition. The first succesfull trials of “golden” tools in industrial production enabled the completition of a very ambitious project – extablishement of the Hard Coating Center, which was officially opened 18. 12. 1985. The evaporation apparatus Balzers BAI730 was installed with all the required peripherials, and the TiN coatings has been deposited on tools ever since. A pain-staking work followed in implementation of this technoligy in Slovenian and then Yugoslav industry, which included numerous visits in industrial plants and seminars, specifically organized for technologists. 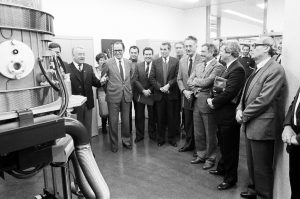 By that year TiN had been the only hard coating available to the industry. In 1992 we developed the CrN coating and offered it to the industry. Even today, our papers on implementation fo CrN coating is among the most cited papers of the department co-workers. The paper P. Panjan, B. Navinšek, I. Milošev: “Industrial applications of CrN (PVD) coatings, deposited at high and low temperatures”, Surf. Coat. Technol. 97 (1997) 182 has been cited more than 200-times. 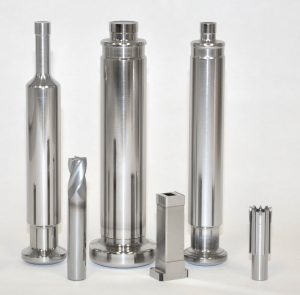 Purchase of the sputtering apparatus CemeCon CC800/7 with four magnetron sources. It enables the deposition of multicomponent coatings (TiAlN), which was implemented in industry, as well as multilayer coatings (e.g. TiAlN/TiN). The latter was the background for our simulation of coating deposition at multifold rotation, which we upgraded with a computer program to predict the multilayer structures. 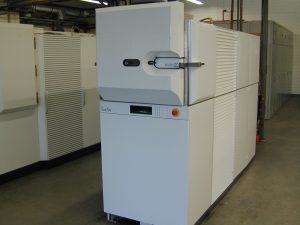 Purchase of the sputtering apparatus CemeCon CC800/9 with four magnetron sources with the ability for pulsed power supply. It enables the deposition of nanolayer, nanocomposite and low-temperature coatings. Gradually we implemented in industrial production the patented blue coating AlTiN, the self-lubricating coating aCN and the nanocomposite coating TiAlSiN. 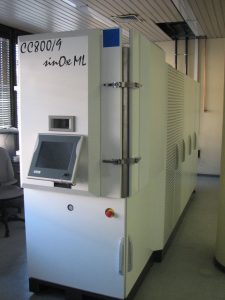 Installation of the Kobelco AIPocket apparatus, which operates using the cathodic arc. It enables the deposition of similar coatings as using magnetron sputtering; at the same time it offers the possibility for a comparatitve analysis of coatings prepared by different deposition techniques. 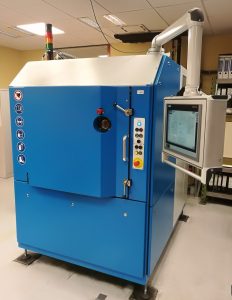